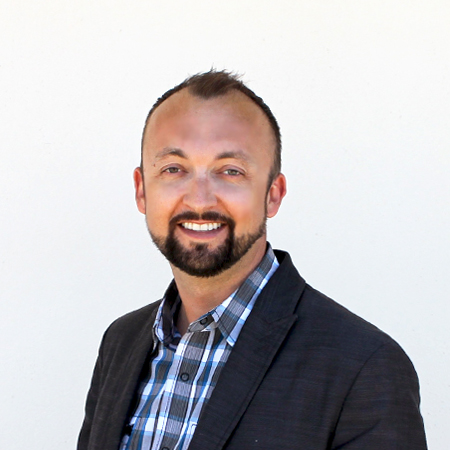 He moved to San Luis Obispo in 2018 and enjoys living steps from the ocean in Shell Beach. Born and raised in the Bay Area, Ron graduated Cal Poly with a GrC Bachelor degree. Upon graduation, Ron joined the US GPO in Washington DC to help redesign the US Passport and transform the US Government from print to digital. After 3+ years there, he moved back to Silicon Valley and worked for Duarte Design, the #1 Marketing Agency focused on presentation design. At Duarte, Ron and his team helped Silicon Valley leaders inspire the world. After that chapter, Ron started building tech companies.

Residing in Silicon Valley, Ron consecutively built four tech companies from the ground up. Each company was successfully purchased (acquired) by a larger company.  At the age of 29, Ron built a 60-person virtual data warehouse company, called LinkWex. The company was acquired by Cisco within a year. After this experience, Ron caught the Silicon Valley bug of building or flipping tech companies. He then joined a four-person company called WebDAM, and within three years bootstrapped the company to a team of 150 people. The company was successful acquired by Shutterstock, Inc. He was then the VP of Marketing at Shutterstock before being recruited by another Silicon Valley tech company called ReadyPulse. As VP of Marketing here, Ron helped accelerate ReadyPulse to their rightful place as an industry leader. ReadyPulse was successfully acquired by ExpertVoice just two years later. Next, he joined Datanyze as SVP of Marketing, where Ron modernized the brand, operations, and marketing, leading the company to an acquisition by DiscoverOrg.

Ron is a recipient of Marketing News’ Top 40 Under 40 Marketing Executives Award, and has implemented best practices and over $30million in marketing technology at companies. Ron's work has been featured in Marketing for Dummies, and several other publications in the marketing industry. Ron also serves as an advisor to three tech companies.

In his personal time, Ron can be found competing in endurance races and triathlons. His other hobbies include helisking (snowboarding) on the peaks of Canada, surfing in Pismo, backpacking, hiking, and producing music. His most dangerous pursuit right now is shopping to adopt a puppy.