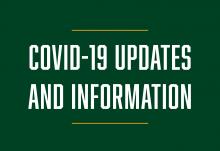 Mika says on this experience, “The idea of transforming a plain bill statement into a user accessible modern bill statement, a mobile app, and a website was intimidating at first; however, through this experience, I found my new passion for UX/UI and made lots of connections in the graphic communication industry. Xplor is a unique opportunity everyone should try because it challenges yourself and what you’ve learned in class.”

During Spring break GrC seniors Liberty Ortiz and Katie Breed along with Professor Ken Macro traveled to Orlando, Florida to take part in the annual DSCOOP (Digital Solutions Cooperative) Conference. Over the course of the three-day conference they participated in multiple learning sessions to hear about new trends in sales and marketing, print technology, and operations management.

Katie said of the experience, “I really enjoyed the opportunity to learn so much about not only the print industry, but also corporate America in general. I learned a lot about new trends in marketing and sales. In particular, one of the sessions I attended emphasized the importance of marketing plans that first build awareness, then trust and finally focus on sales. Since returning from the conference I have implemented this ideology into my work as the Marketing Manager at University Graphic Systems.” 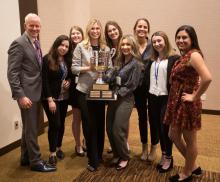 The Cal Poly Technical Association of the Graphic Arts (TAGA) is a club within the Graphic Communication Department. TAGA offers a hands-on learning experience through its six month production sprint to compete in the student publication competition at the annual TAGA Conference.

Every quarter, the Cal Poly’s GrC department throws a career day. Career days are located on campus and showcase employers from various companies. This allows students to interact with professionals and perhaps land a future internship or better, employment. Not only does career day prepare students for interviews and for life outside of college, but it is also is a great way for companies to market their organization.

Career Day is fascinating because students have the ability to approach any table that intrigues them, thus gaining valuable insight by asking questions and learning from employers. Often, recruiters provide pamphlets or little souvenirs that leave attendees with a lasting impression.

This past quarter, the GrC department was honored to welcome Apple at career day. It was great to have Hannah Giorgi, a GrC alum, join us at a booth and represent Apple’s packaging division. It is really awesome when alums partake in Career fair as it gives students true inspiration. They are able to see the big things GrC students can achieve prior and post-graduation.

Young Brian Lawler, a woman who knew her heart was at Disney since 6, and a couple of tips from Adobe made this International Graphic Communication week one to remember!

A year ago, Brian Lawler received a mysterious box with many photos from the GrC department 50 years ago. Lawler recollected his memories of being a student and the laughs, the tears, and the special people that came with it. Photos ranged from Lawler in TAGA, to the bindery sink (when it was clean), and a host of other photos from awards, ceremonies, and tours at the Shakespeare Press Museum.

Kayla McCarty was 6 years old when she told her dad she was going to work for Disney, and 20 years later Kayla is a marketing manager for the Walt Disney Company based in Orlando, FL. After graduating from the Graphic Communication department in 2015 with a concentration in Design Reproduction Technology, Kayla moved to Orlando and has since worked in creative, communications/social media, strategy, and project management roles at Disney. (Taken from GrC dept)

Sephora’s Internal Branding team, Project Manager, Victoria Chau was also another GrC alumna. Chau graduated in 2014, with a concentration in Design Reproduction Technology and minor in photography. Chau spoke about how always saying “yes” can lead you to learning things you never thought you would be doing. Chau also stated that she still using her GrC skills in her current work with Sephora.

Lastly, principal scientist, Dov Isaacs from Adobe spoke on lies your printer has told you. He covered a brief analysis of some of the root causes and issues behind those “lies.”

This month, Camp PolyHacks took place, and this is anything but your typical camping experience. Forget the food, tents, and wood. Instead, bring your creativity and maybe a hipster, hacker, and a hustler with you on this two day trip at the SLO Hot House. From January 18-19, 2019, GrC students competed in the Camp PolyHacks. Within the team, there were three different types of positions. There were “hustlers”, who ran the business side of the hackathon. There were “hackers”, who ran the actual hacking side of the hackathon. And there were “hipsters”, who were in charge of the design aspect of the hackathon. Within the team there were 8 different organizers, so everyone was able to have their own job. GrC students on the team, like Emily Ticknor, stated that her role was that she “provided proof of the concept, helped refine it, edited the elevator pitch, and made sure our team was going to deliver our project on time with a clear, concise and actionable application.”

Camp PolyHacks welcomes, “Cal Poly students of all background to work in teams to ideate, design, pitch, and market their solution to a problem facing the community. It’s a Learn by Doing marathon of collaboration, learning, and creativity.” Over the 48 hours, students find ways to solve problems in 1 of 3 trails: sustainability, education, and inclusivity.

On Friday December 7th the Senior Showcase took place in the Graphic Communication building. The Fall quarter “Snowcase” involved twenty-four seniors of the major presenting their hard work from the past ten weeks in a reverse career fair setting. Each senior was able to work hands on with a project of their choice revolved around their concentration and major with enthusiasm and drive.

The Senior Showcase is a great opportunity for Graphic Communication senior students who are excited about real world work experiences to show off their dedication to being young, successful and soon-to-be college graduates! The seniors during the Showcase represented a good role model status for the younger GrC students who came to take a look, and as always the showcase is an open invitation to department professors, alumni, friends and families as well as the community.